“Inspired in its conception by the bountiful crop harvested by previous scholars in pursuit of sources for Eugenio Montale’s early poetry, not to mention the radical difference between the ‘first’ Montale and the ‘second’, a difference that almost seems to beseech an intertextual exegesis, this book seeks to demonstrate that Satura and the poetry of the ensuing collections owe no negligible debt to verse and prose texts by others. Up until now considerable research has been carried out on the formal and thematic aspects of the post-Bufera corpus; quite insufficient attention, on the other hand, has been paid to the intertextual features of the later verse. Indeed, (and this is something of a rarity in the crowded world of montalistica), one might go as far as to claim that there exists something approaching a critical lacuna here. The present study, then, aims to help redress this imbalance, in the most un-Romantic belief that our appreciation of the poetry from Satura to Diario postumo is augmented, not diminished, by a knowledge of the modes in which its author enriched and vivified his writing by way of the artistic expressions of others. The writers discussed here, from an intertextual perspective, include: Robert Lowell, William Carlos Williams, Giorgio Caproni, Natalia Ginzburg, Vittorio Sereni, Nelo Risi, Karl Löwith, Andrea Zanzotto, Italo Calvino, Luciano Erba, Giovanni Giudici, Antonio Barolini, Sergio Solmi and Umberto Eco.”

Born in Redhill (England) in 1975, John Butcher has published monographs on Vittoria Aganoor Pompilj and Domenico Rea. He currently holds an ‘assegno di ricerca’ in Italian literature at the University of Rome ‘La Sapienza’. 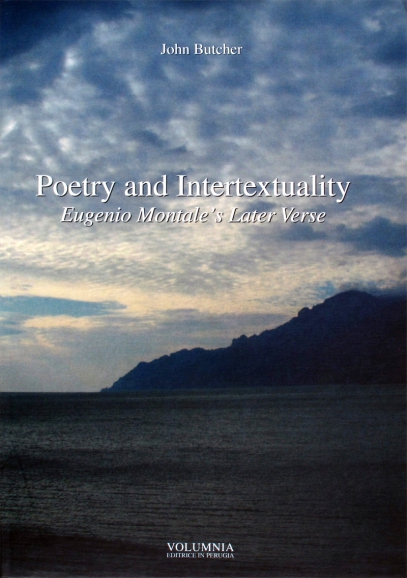